Why Does My Cat Rub Against…Everything? 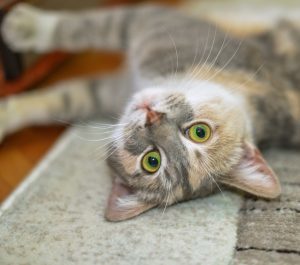 Cats rub against objects to mark their territory and put their scent on it.

Every time you come home, you are greeted by your cat rubbing against your legs. You thought that this was just their way of saying hello, but then you notice that they rub against inanimate objects as well. They rub against your couch and dining room table as they walk by, but why? This may seem strange to you, but it is a normal cat behavior. Here are some reasons why your cat rubs against you and various household objects.

Cats have scent glands on their forehead, lips, chin, tail, paws, and the sides of their head as well. These glands release a chemical substance called pheromones. You can’t smell this chemical, but it is not for you to smell. They are released so that other cats can get information about the one rubbing on things. The pheromones can tell cats everything from the reproductive status of the rubbing cat to when the cat actually rubbed up against the object.

Similar to how dogs pee on objects outside to mark their territory, cats are marking theirs by rubbing against it. They are leaving their scent on a person or an object to claim it. In a multi-cat household, another cat may rub against the same object to reclaim it as their own when they smell the other cats scent on it. When your cat rubs against you, they are claiming you as a part of their group. As mentioned before, a lot of cats immediately rub against you when you come home. This is their way of covering any unfamiliar scents and re-claiming you.

This is another word for head butting and is a sign of affection, despite what head butting means for people. Cats will commonly do this with other cats that they have a positive relationship with, but they will also rub their face against yours too. It is the equivalent of a hug from them so don’t be alarmed. They will generally start purring when they do this. Cats only bunt when they are comfortable with one another, but it can also be a sign of ranking. Cats on the lower end of the scale will generally head butt more than the cats that are higher up.

For 20 years, the Catonsville Cat Clinic has been providing quality veterinary care to the cats of Catonsville and beyond! Dr. Pam Nesbitt, who purchased the practice in July of 2011, runs the Catonsville Cat Clinic with compassion in mind. A team of professionals with an advanced level of veterinary medicine is at your service to make sure your cat is healthy and happy. So stop on by; we’d love to get to know you and your cat!

For more updates and advice, be sure to follow our Facebook, Twitter, and Google+! You can get in touch with the Catonsville Cat Clinic by giving us a call at 410-869-0800 or visiting our contact page.